Then i added a pink swaddle

i decided to take on more orders, being on bedrest, that i can either do by hand or take my time finishing them so that i can limit my time sitting up at the sewing machine.  Since this order was needed in such short notice i was able to do it all by hand.  I looked up some handstitching on pinterest and decided to do the triangular kne shown in the pics!

Here is the 2 inside the mickey head! I really enjoyed using this stitch!!

I also LOVE how it looks behind the scenes…in the back.

Here is the “two” and the mickey 2 tie finished.

Heres a closeup on the stitching detail.

Headbands and Fascinators for all!

Though it has taken me longer than usual, because i must be laying down most of my time…i am not even allowed to sit up!!, i have still been able to finish a few orders!

The first is a first birthday hat with marabou and matching tie!﻿﻿﻿﻿﻿﻿﻿﻿﻿﻿ 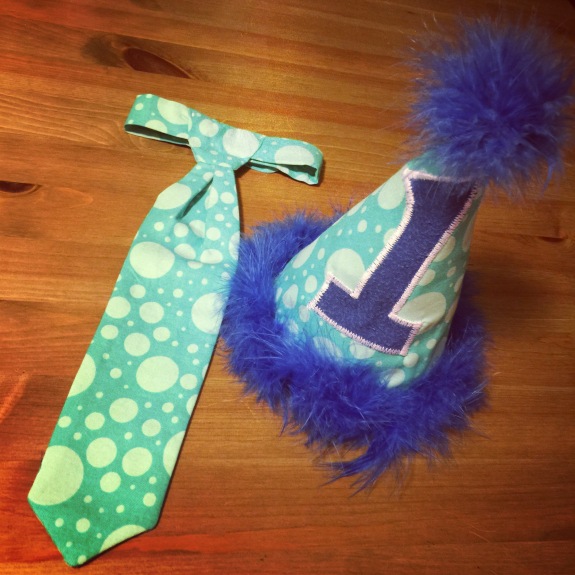 The next is a set of vintage inspired rosette fascinators which work as headbands for newborn and her toddler sister.  ﻿﻿The newborn set is shown with lace fingerless gloves/wristlets with scalloped edges, buttons on the gathered sides and a ribbon woven through the upper part forming a bow. 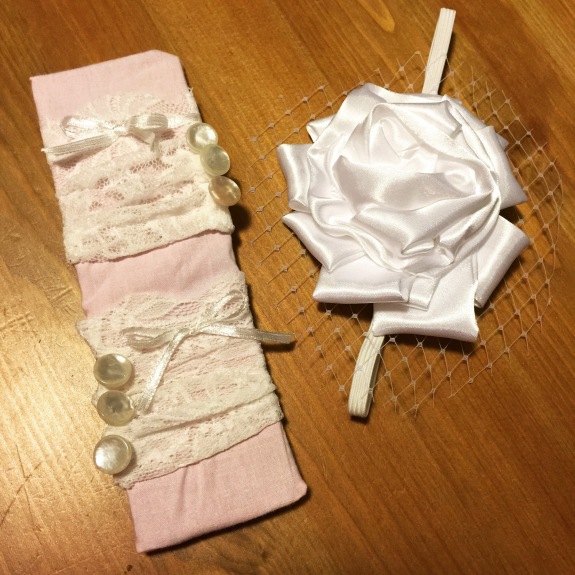 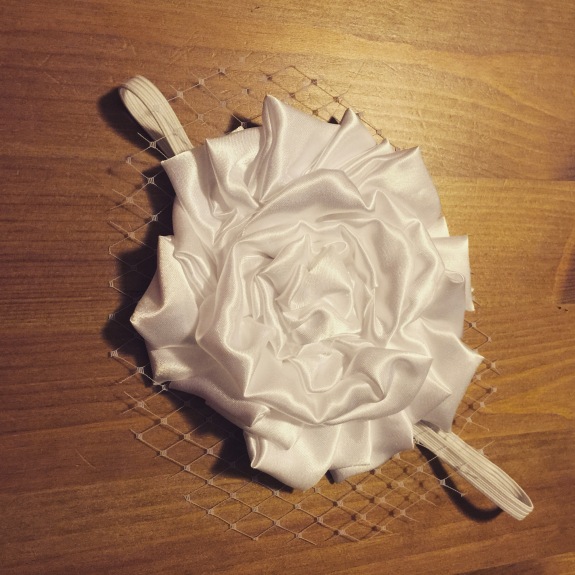 This last piece is also a newborn fascinator headband inspired by cintage fascinators.  It is a tear drop piece with bow. 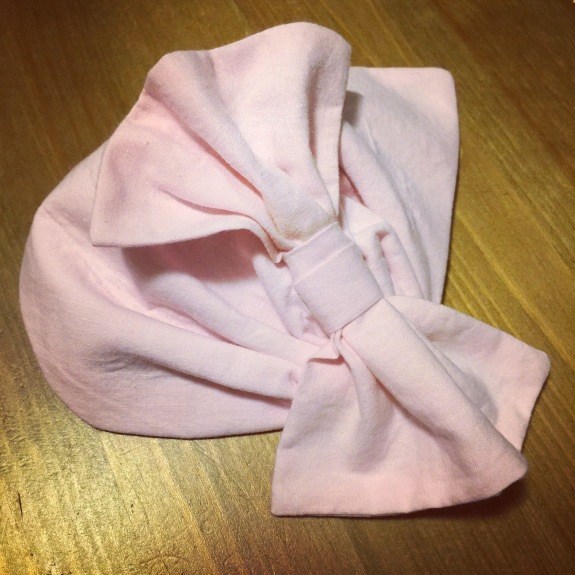 You can follow my work via my page at facebook.com/dotgalima﻿

Here are somethings i still have available for sale: 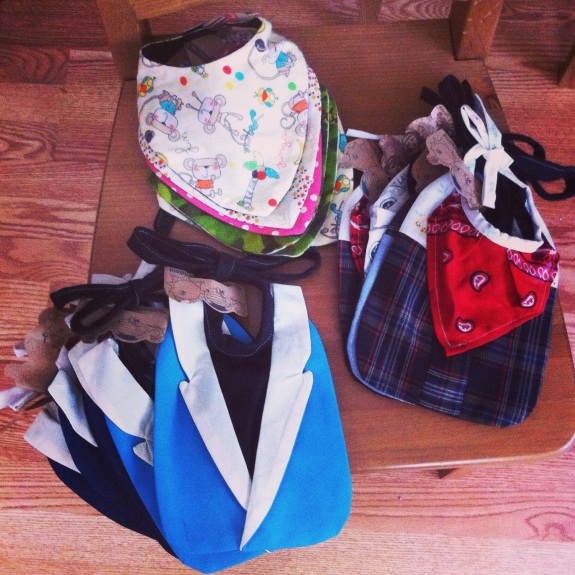 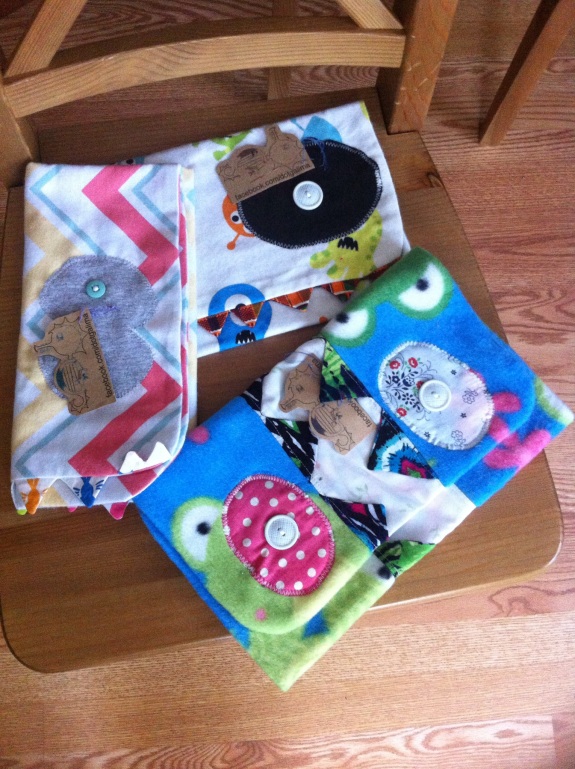 This year my friend and i are splitting a booth at the the cameron park mommy market
For more info please email me galima.golightly@gmail.com

Here is a preview of some homemade items i have ready 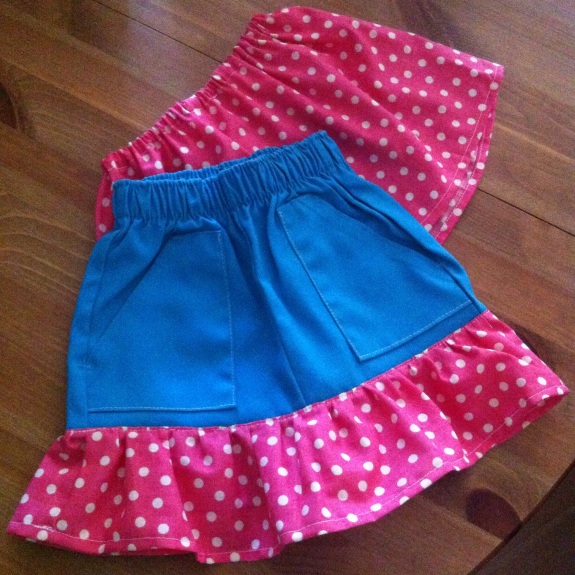 Above are girls skirts, burp cloths and my hang tags

Im so very grateful to all of you who have read and followed my blog in the past! Since last November we relocated to an area where internet is not easily accessible so that is the reason for my overdue absence from this blog!

I did however continue to post on my facebook page here and still update on a regular basis. I would love to see you all again! facebook.com/dotgalima

Here’s another mashup of all things food, dating back from last valentine’s day!

I had seen recipes for greek yogurt mousse on pinterest, so i decided to try one out. I always try to look for recipes that use ingredients we have or ones I can figure out a substitute for.

I have made this recipe several times since then and have figured out the best way to make it is make a chocolate ganache in the microwave: melt chocolate chips in a minimal amount of milk. The less milk you use, the more stiff the mouse will be. Then, I mix in greek yogurt until the overall color is a light chocolate, or mix in the greek yogs to taste.

To go with our dessert, my husband grilled veggies and steak that turned out absolutely divine!

Another dessert I made for valentine’s day was individual chocolate lava cakes. Now, I didn’t have enough chocolate to fulfill my chocolate cravings and only realized it halfway through, so I made my own chocolate using cocoa powder. The center became solid and wasn’t runny like a normal chocolate lava cake. It was also a little more salty than usual, as the effect of cocoa powder usually gives. But overall, I enjoyed the sweets that wen with our delicious meal!

The next snack I have made a few times. I found the recipe for gronola bars from pinterest as well. The first time I used it, I combined whatever sunflower and pumpkin seeds we had left as well as some mix of nuts. I used toasted coconut to hide the texture, as some usually don’t like that. It turned out great and chocolaty! I also used half the amount of chocolate chips and it didn’t melt all the way through, which was better like that, in my opinion.

This next spin off of the breakfast classic were loaded pancakes. I used a banana to sweeten them, but also threw in chocolate chips of course! They were jam packed with all kinds of goodies, like oats, blueberries and other healthy stuff. Although they turned out super dense, I enjoyed them. 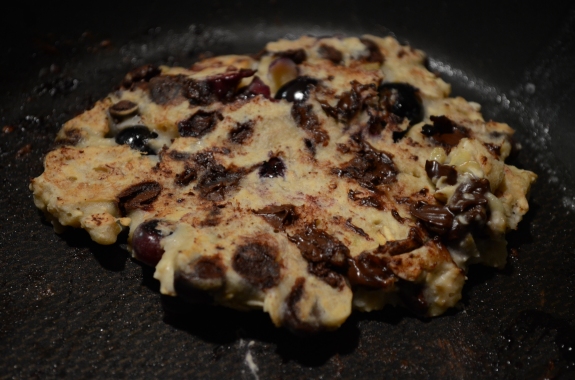 My sister in law, as I had mentioned before, is a great chef! She’s done cakes for weddings, showers, and several other parties. Here is a glimpse of her great chocolate truffle cake with chocolate ganache. It’s so rich in flavor. The middle is her truffle recipe in between a hershey’s chocolate cake recipe. It’s so delicious that not only can I not express enough in words how great it is, but I can eat the whole thing all by myself!

The next two recipes are ones I made this past week. The following recipe is for an oatmeal bliss bar. I was craving some oatmeal cookies, but was too lazy to look it up, so I made my own.

Forgive me if there is not enough explanation, but I will try and be thorough with the recipe!

2 cups brown sugar, or you can probably get by with 1 1/4
1 cup oatmeal
a scoop of mayo with a spatula
pampered chef cinnamon plus blend-maybe about 3 tbsp
2 cupsish of raisin/craisin mix
1/4 lb butter-but you can probably put less, as there is butter for greasing the pan-the reason why i say to use less butter is so that it’ll be chewy but also because these came out gushing with butter in every bite!

It will still be jiggly when it is done. Take it out and let it cool. When it solidifies it is ready to eat!

The last recipe is our very own filipino (not to be confused with the mexican version) leche flan. It is rich, smooth and packed with calories! 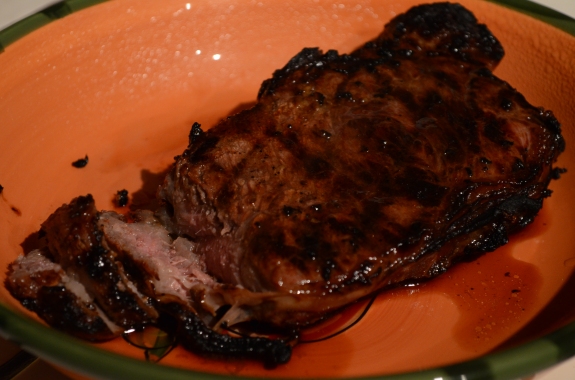 This blog is a mashup of some of my past projects that I hadn’t posted yet….

A friend of a friend asked me to alter her grandpa’s button up t shirt so that she could wear it. It was a plain, oversized, long sleeved, button up with cuffs and two breast pockets. I took the breast pockets off. Then, I altered the sleeves to make them short and have a little poof.

Here are the tucks on the sleeves. 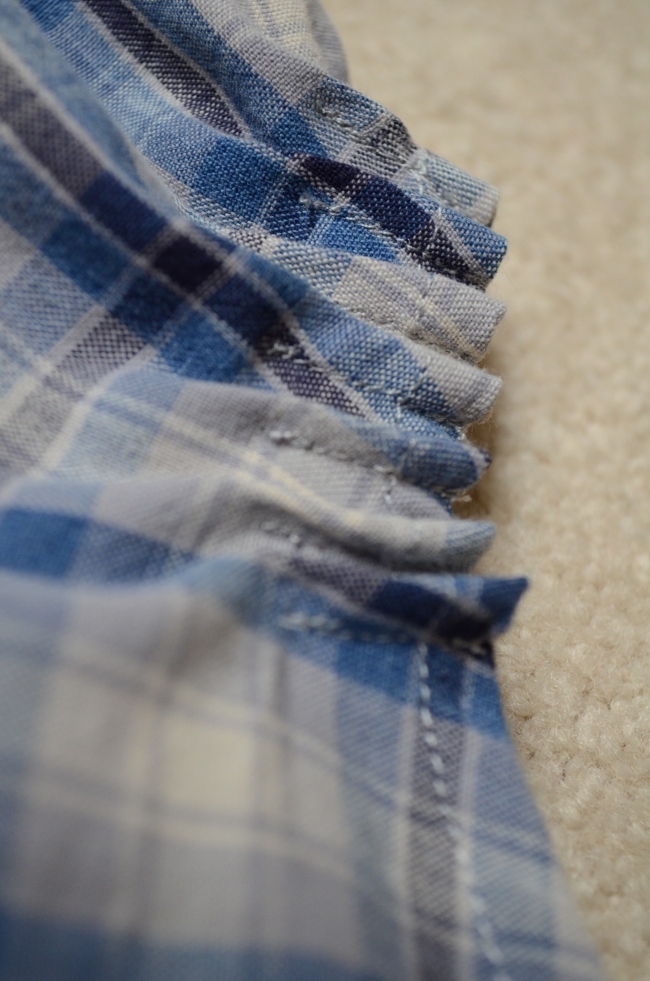 I added darts in the back and front to bring out some shape.

I was also able to curve the sides.

It became a wonderful shirt that she could wear with the remembrance of her grandpa!

This next project was also a simple one. My brother, inspired by the Distillers, wanted to add zippers to some of his fright night tees. So when I was in town, I grabbed my zippers and added them. It was quite a simple add. I just sliced the tees down the center and sewed them with a clean finish. 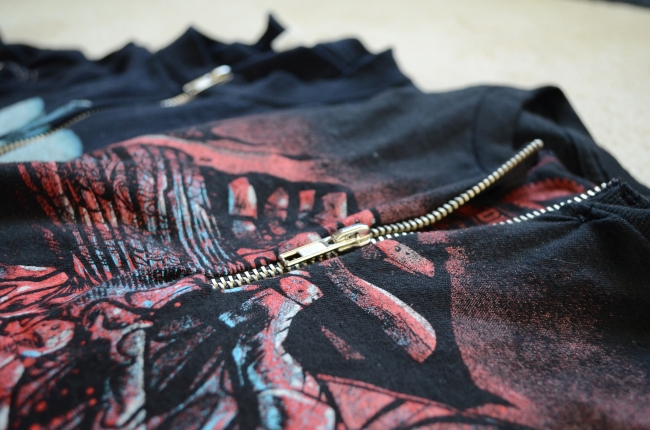 Towards the end of my pregnancy, I wanted to make several things for the baby, so that I wouldn’t have to add them to my registry. One of those items was a diaper caddy. I just took some bed sheet fabric and made a simple caddy to hang on the crib. It has actually come in handy. 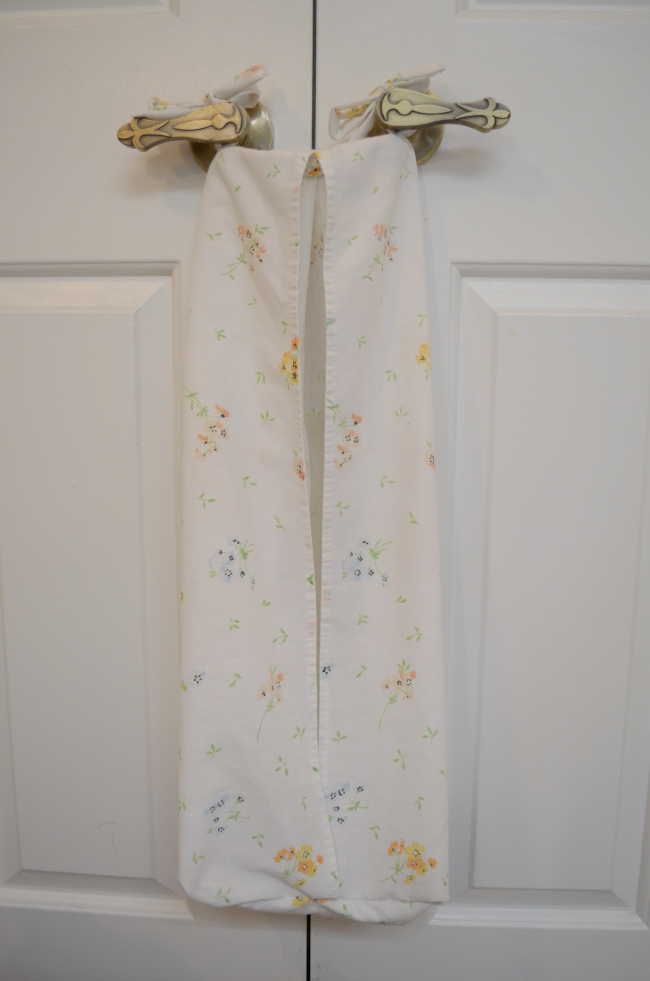 For our friend’s b-day, a 49ers fan, I was able to snag some of this fleece fabric from joanns…it was going like hot cakes!  I also had this brown fur.  And the trapper hat is one of my favorite styles of hats to wear around….so I whipped this up for him.  The first one came out too small…way too small…so now we have a toddler version of this sitting pretty.

This is the trapper hat with the ear flaps buttoned up.

Here are the ear flaps released.

For our cousin’s birthday, I made these lace covered mussel shell earrings.  Mussels are one of my favorite materials!

For our newest niece, I made these ballet slipper style fabric shoes.  There is a strap that goes across the front part of her feet just behind the toes.  Then, I put little bows on top of it.

The lace connects at the front of the shoe, goes around her ankles and then criss cross at the back loop and up her legs.

For her big sister, I made her a purse to go with her momma’s diaper bag. 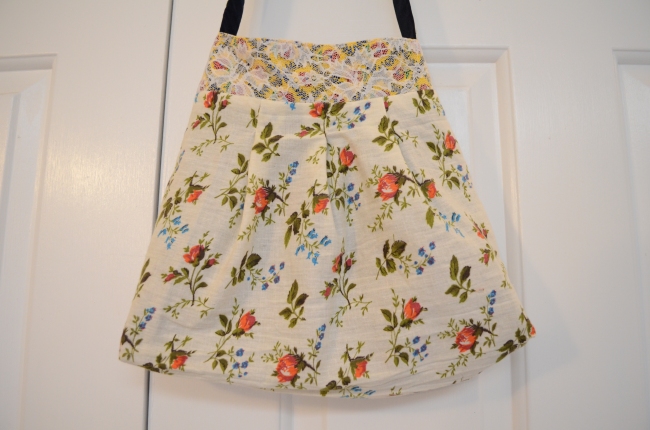 This is the diaper bag.  Since the strap ended up being too long, we ended up pleating the strap on either side towards the bag part.  I also added buttons and flaps at the bottom so that it can be made smaller or extend to the size shown below. 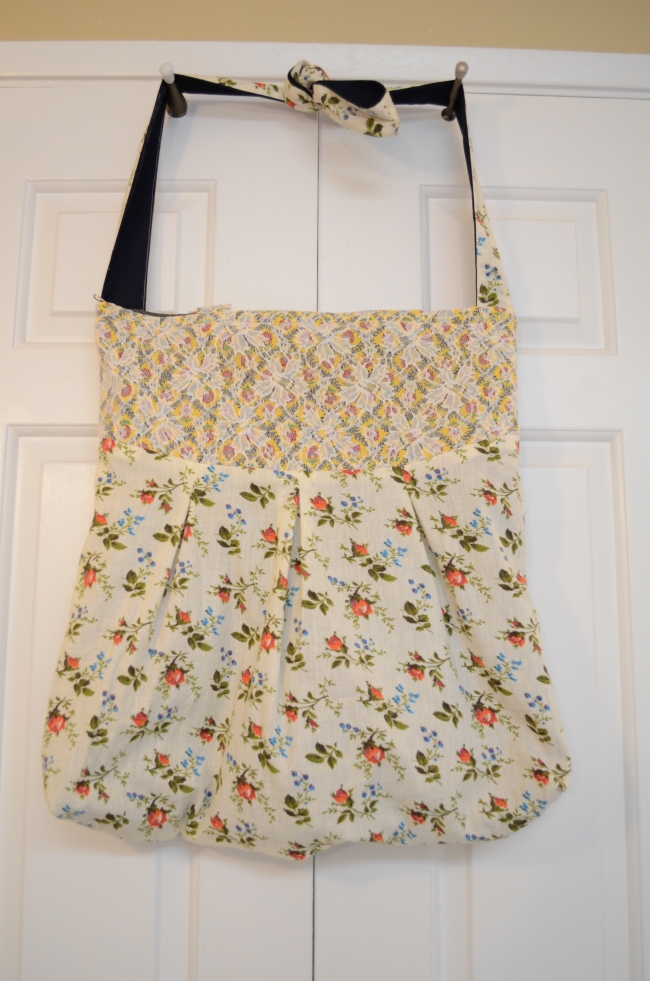 Here is the tail of the zipper detail. 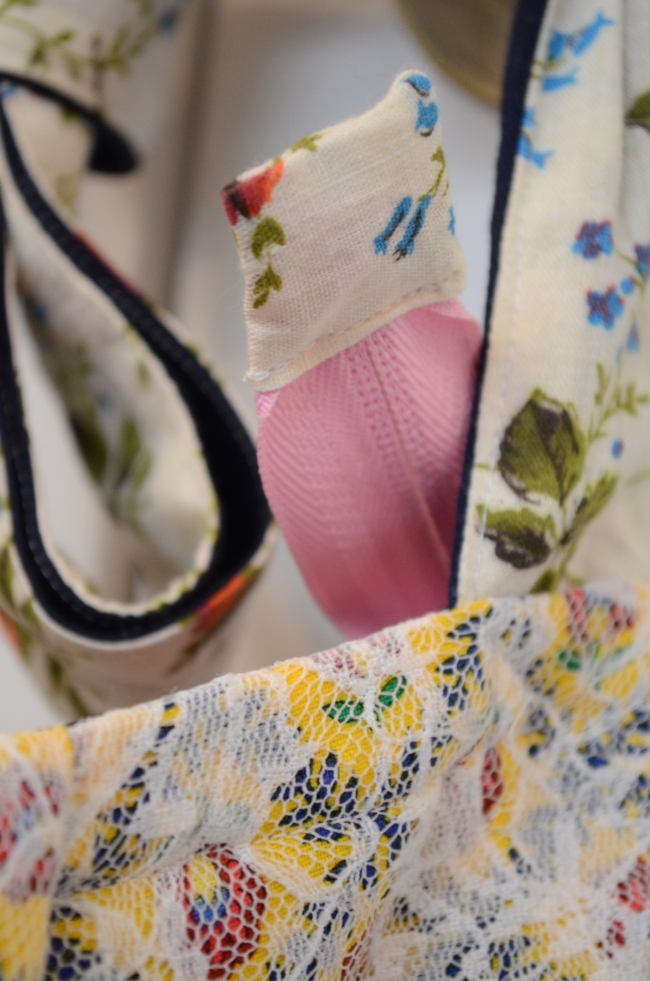 Shown below are the inner pockets close to the opening so that you don’t have to dig your whole arm into your bag. 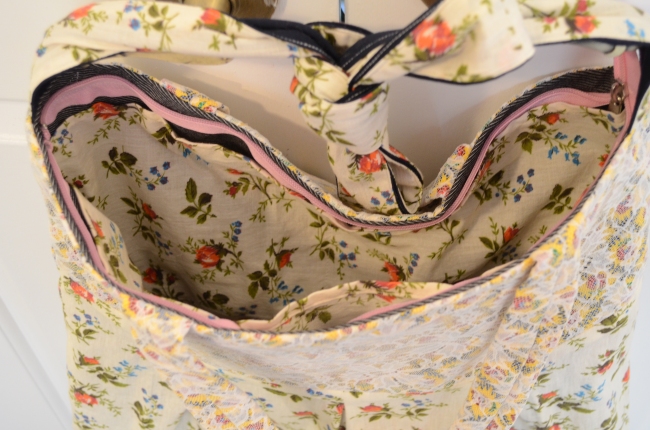 Stay tuned for more of my finished projects!

My nephew and his brothers LOVE legos.  So, since a few of them were in town (back in February), and one of them was turning a year older, I decided to make a lego head pillowcase.  The black and white are from t-shirt fabric that I still have from leftover band t-shirts.  The yellow was made from fabric I found in the remnants bin.  The best place to find fabric is the remnants bin!

Since my brother’s birthday had just passed, also back in February, I decided to make him a pillowcase too!  I tried to come up with a horror movie theme….and I wasn’t like where that was going.  I saw a white pillowcase with red smeared and I didn’t like that idea…it took no brains to make that one…j/k.  Then, I dabbled with the idea of trying to make a face hugger pillowcase…but as soon as the google images came up I knew I couldn’t do it!!!

So, you can NEVER go wrong with Dr. Who stuff!  The dalek is such a popular item, so I layed it all out….and decided I liked it!  The black and gray were made from leftover t shirt fabric and the blue also from remnants! 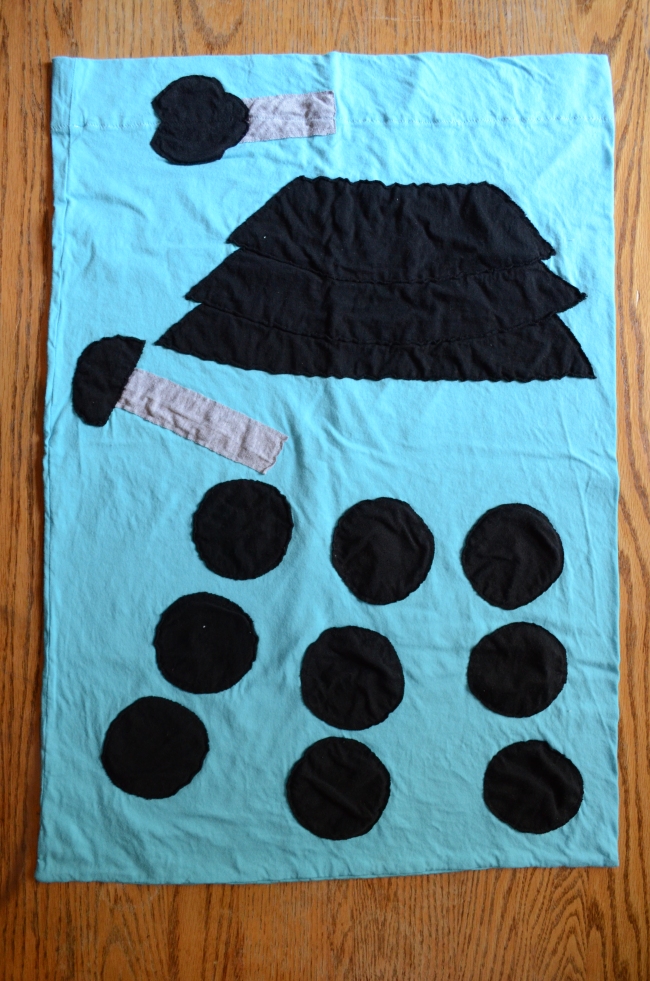